Can I Replace My iPhone Glass Back If It Cracks?

A cracked iPhone screen is one of modern society’s secret shames. Although it’s not so secret – everyone around you can see it.

Recent models of the iPhone have glass backs as well as screens so the potential for shame has doubled. You don’t have to put up with it though. Let’s look at how you can replace your iPhone glass back if it’s cracked or broken.

A Brief History of iPhone Construction

The first iPhone debuted in 2007 with an aluminum and plastic back. The next couple of updates, the iPhone 3G and 3GS, both had a full plastic back.

The iPhone 4 was the first model to use a glass back. Apple stuck with the same design on the next version, the 4S, then switched to aluminum on the iPhone 5.

The iPhone 5C that came out a year later went back to a plastic back but otherwise, all new models up to the iPhone 7 used aluminum for the back case.

When Apple released the iPhone 8, they went back to a glass-back design. The iPhone X was released several weeks later in that same year and also had a glass back. Every new model since then has used glass.

All the materials Apple has used in the iPhone designs have had their own disadvantages. Plastic can get scratched up pretty quickly, aluminum can scratch as well as bend, and glass can break. Of all the materials, glass is one of the best.

The Benefits of a Glass Back

A big reason for the switch to glass in the iPhone 8 and X models was so they could support wireless charging, known as Qi charging. This is an inductive charging technology that needs to be able to pass through the back case of the phone. Aluminum blocks the inductive signal so Apple had to make the change.

Plastic would have supported wireless charging as well but it’s not as strong as the glass they use on the iPhones and it doesn’t provide as much of a premium look and feel.

Build quality and how the phone looks and feels when you’re using it is important to most Apple customers. An iPhone is a status symbol for many people and Apple wants it to be a piece of art. The glass case designs they’ve used since the iPhone 8 have a distinctly better look and feel than plastic would have.

A glass back also means less interference with the cellular antenna. As the iPhone gets thinner and the edge-to-edge screens take up more of the usable space in the phone, it takes more ingenuity to fit the antennas into the case. A glass back gives Apple more flexibility with this than aluminum would.

Some Pitfalls of the iPhone Glass Back

The glass Apple uses in the case design for the iPhone is a toughened glass made by Corning. They’ve invested in Corning to help develop even stronger glass but at the end of the day, it’s still glass. If you hit it hard enough, it’s going to crack.

iPhones go everywhere with us and tend to get dropped or knocked around quite a bit. You’ve probably seen lots of people with cracked screens for this reason. Adding a glass back means both sides of the phone can get damaged if dropped.

Fragility is the only functional disadvantage of a glass back but it has an indirect effect on something else – replacement. The glass back on recent models of the iPhone is much harder to replace than the aluminum and plastic backs of earlier models.

Apple’s focus on making its products as thin and svelte as possible is well-known. Modern iPhones are no different and might be the best example of this.

Potential Problems of Cracked Back Glass

If you pay attention to people around you, you’ll see lots of iPhones with cracked screens and backs. Some of them will even look completely shattered. It’s hard to imagine how some people can read what’s on the screen through the spiderweb of cracks.

In some cases, the cracks don’t affect the operation of the phone. You can still tap and swipe on the screen with no problems and the iPhone can still connect to wireless signals just fine.

That doesn’t mean it’s okay to use that way though. The biggest problem with cracked glass isn’t a technological issue, it’s a safety issue. That cracked or shattered glass can be sharp and having it on something you hold in your hand, press against your cheek, and handle dozens of times a day isn’t very safe.

You could find yourself with cuts on your hands or face from those sharp edges. And if the glass is seriously broken, pieces of the glass could come loose, leaving even more dangerous edges on the phone and potentially bits of glass in your pocket or purse.

There can be technological problems due to broken glass as well. All models since the iPhone 8 are rated for water resistance. If the glass case of your iPhone cracks, water can get into the inside of the phone. Water damage isn’t covered by Apple’s warranty even if the case is intact but certainly not if it’s broken.

Your Possible Solutions for a Broken iPhone Glass Back

If you drop your iPhone or damage the back glass in some other way, you’ve got several options for dealing with it, including:

Some of these are more extreme than others but let’s look at what to consider with each of them.

Put Your iPhone in a Case

The first option is to put your iPhone in a case. A case will cover the back of the phone, which both hides the damages and helps to hold it together so it doesn’t get worse.

Putting your phone in a case might have helped avoid the damage in the first place but if you didn’t have it in a case, it was probably for a reason. Lots of iPhone users like the look and feel of the bare phone, the way Apple designed it.

Adding a case adds bulk to the phone and makes it less comfortable to hold. Being forced to put a broken phone in a case to protect it against more damage still has these same problems.

A case also won’t protect your phone from water damage because of the loss of water resistance and pieces of glass can still become loose. When you remove the case, you’ll face the same problems.

The second option will definitely fix the problem but it’s a pretty expensive way to do it – buy a new iPhone. This might not be such a bad idea if your cracked phone also needs a battery replacement or is already several years old but if your iPhone has a glass back, it’s probably not that old.

The iPhone 4 and 4S are old enough that very few people would still be using them so you probably have an iPhone 8 or X or newer. Those models are recent enough that it’s unlikely you’ll want to spend over $1,000 to replace it with a newer model.

Even if you buy a new phone that’s the same model as the one you’ve got, you’ll still end up paying hundreds of dollars for it. iPhones hold their value much better than most technology products do so a two- or three-year-old phone is still expensive.

The next option for iPhone back glass replacement is to attempt to do it yourself. This is probably the worst of your options though, even if you’re comfortable working with delicate electronics.

Because of the way modern iPhones are assembled, removing the back glass is no simple feat. You need to find a way to break the seals between the back of the phone and the internal components that are fused to it. There’s no screws holding it together or gaps that you can use to pry it apart.

If you try to pry the back off the phone without the proper preparation, you’ll end up breaking the circuit board or other internal parts. If that happens, you’ll have no choice but to buy a new phone. There’s no way to repair a broken circuit board or processing chip.

The next question is, how are you going to reattach all those things to the new back with the same degree of precision and accuracy as Apple did? What are the chances that you’ll be able to reconnect everything properly on your first try?

It’s not worth trying to do this repair on your own. Unless you’re curious how all the pieces of your iPhone will look when they’re laying on the table because your phone is beyond help, don’t try this at home. 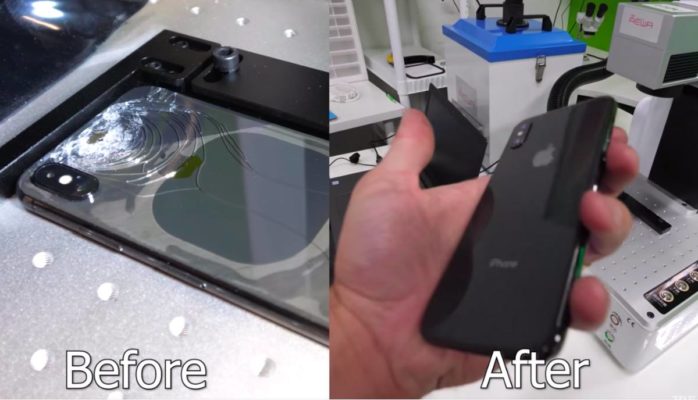 Don’t Let a Cracked Back Get You Down

Don’t put up with a cracked or shattered iPhone glass back. It makes it less fun to use, it doesn’t look good, and it can be dangerous if ignored for too long.

You also don’t need to consider buying a new iPhone or taking chances with trying to replace the back yourself. Device Pit Stop’s iPhone back glass replacement service will have your phone looking and working like new in no time.

You also won’t need to send your iPhone away to some far-away repair center and wait for days or weeks to get it back. You can book an appointment if you’d like but no appointment is necessary for our repair service. Device Pit Stop typically has the glass back replacement done in less than an hour.

Get in touch with us or stop in today to find out how easy it is to get your iPhone fixed up and looking like the day you pulled it out of the box.

The best solution for iPhone back glass replacement is to have it done by a qualified service center. They’ll have the proper equipment to remove the back panel without damaging any of the internal components and their technicians will be trained in the proper procedures to do it safely.

This service can vary in quality from one service center to another though. Some repair shops chip the glass off the back to remove it from the phone, which can cause even more damage. Device Pit Stop’s iPhone back glass replacement is much more reliable.

We use a laser cutter to separate the glue and spot-welds holding the back glass to other components in the phone. The same laser machine is then used to detect the area on the back that needs to be fixed.

The machine uses red lasers to detect the spots that need repair and white lasers to cut through the adhesives. This lets us offer a lifetime performance guarantee on our iPhone glass back repair service. That’s something that most repair shops would never offer because they’d be too worried that they would see you back again.